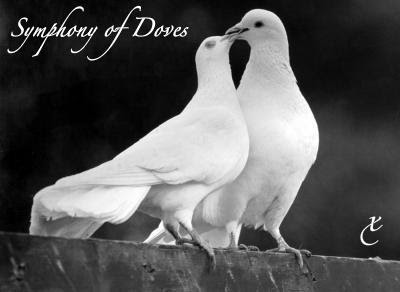 I've always been enamored by the Beauty of Doves.  I guess it started when I was a little girl and I went to Venice, Italy, for the first time.  The beauty in the city alone is breathtaking, but to see all of the Doves and feathers at San Marco Square, was fascinating to me.  There IS something so graceful about Doves, not to mention what they symbolize... The Holy Spirit, Prophecy, Peace, and Love!

After I had studied the different types of Doves, I found out that Doves BOND together for life.  Doves stay together until one of them dies, unlike other birds.  It's no wonder, that they are attracted to the most Romantic city in Europe. Truly beautiful and amazing.

To me... Doves are the Graceful Ballet Dancers, in the Bird Kingdom.  ;)

It was early one Spring morning, when I was startled by the oddest sound coming from outside my bedroom window.  I thought it was a cat or a baby crying?!  As I awoke, I knew that it couldn't be a baby, because my bedroom is on the third floor.  I looked outside my window but I didn't see anything.

After my morning coffee, I took King Mufasa (my dog), out for a walk.  My neighbor stopped me and he said, "Hey, did you hear the two doves this morning... Looks like they built a nest right outside of your window... Love is in the air." he joked.  WOW!!!  Doves outside of my window???  I couldn't believe it.

Every morning, I would hear my Morning Doves make this 'cooing' sound and I eventually became accustomed to hearing it.  They became my rooster in the morning. hehe  If you've never heard the sound, I will post a link at the end of this blog.

One evening before I went to sleep, I started thinking about my Morning Doves.  I then began asking God questions, as I always do.

"What are the doves saying to each other?... They must speak a language, that keeps them together forever... I want to know what it is... I want to be able to communicate like the Doves!"

That night as I slept, I had a dream... There were two white doves sitting on a log in the middle of the ocean.  I know it sounds like a joke, right?  haha

It was a dream straight out of Disney, with the two doves talking to one another.  I call these type of dreams my "Heavenly Disney Dreams." ;)

Anyway, this is what the Doves said to each other...

MALE:  I am Honor, You are Dignity
FEMALE:  You are Favor, I am Grace

I thanked God, for sharing the 'Language of Dove' with me and I looked up the definition for each word and wrote them down.

Now every time I hear my Morning Doves, I think about these four words.  I also think about how I may be able to implicate them in my daily life, whenever I am speaking of or to someone.

I believe, if all of us treated each other with a little more HONOR, DIGNITY, FAVOR, and GRACE, we too will be able to communicate better and have relationships like the Doves!  ;)

Goodnight and may all of you have "Heavenly Disney Dreams," tonight! 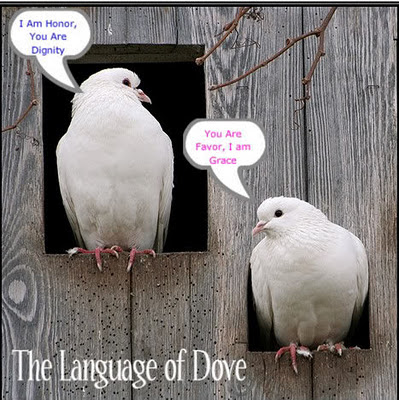 Beautiful and inspiring, Lisa! Thanks so much for sharing. God has had doves on my heart over the years, and so I deeply appreciate this.

Really well written..very inspiring and moving. I started following you. I am a photographer and love birds. I'm going to Rome next May I will look for the Doves

This is a beautiful story and truly inspirational! Your most recent follower:)
Great job and keep them coming:)

Thank you for following me and for the comment.

WOW!!! Have you ever been to ROMA??? It is BEAUTIFUL! I have family there. It is definitely a Photographer's Heaven! haha

I can't wait to SEE what you capture! ;)

Have a BEAUTIFUL day!

Awe, Harmony I think I thanked you for this BEAUTIFUL comment on FB... but I wanted to thank you again!!! ;)

Thank you Mary, for the encouragement. I'm glad it inspired you and I'm HONORED to have you following me!!! ;)

So these doves are going to have sex outside your window everyday from now on?? um...um....ok.

Such a beautiful story,I will forever think differently of the pair of ring necked doves I have living near m home. I hear their call every morning as well.

A beautiful story with breathtaking photographs.Thanks for sharing. :)

@Jan Awe, it's a beautiful sound! When I don't hear it in the morning, I get worried now! haha Thank you for the SWEET comment!

@Abhisek Kumar Thank you so much for reading and commenting!

Certainly, relationships with that would be even more beautiful