The Porcupine and The Rose 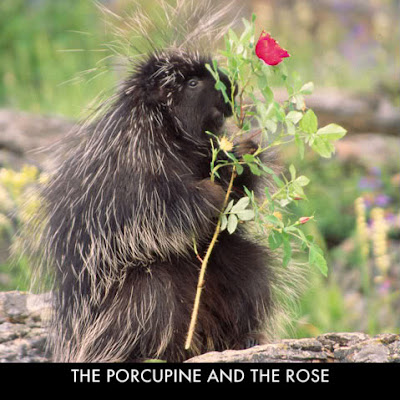 It all started in a City in Southern Italy, in the early 1950's.  There was a young girl they called, 'Bella Rosa' because red was her favorite color and she loved Roses.  She was a striking beauty.  She had long dark hair, big brown eyes, and full lips.  She was an actress, a dancer, and she played football (soccer), as she was growing up.  She loved music and was a huge Elvis Presley fan.

She had a crush on a boy that worked at the bar, where she would stop everyday after school.  When she was 15 years old, her fidanzato (boyfriend) asked her father for Bella Rosa's hand in marriage.  Her father replied, "Do you know who we are? Our family doesn't marry waiters!" Bella Rosa was crushed but she continued to sneak over to the bar, after school to see her boyfriend.

One afternoon as she was at the bar, she noticed this tall man about 6'4 in a United States Air Force uniform.  As she was leaving the bar, this man started following her.  Bella Rosa became frightened and ran, the rest of the way home.

Two weeks later there was a knock on her front door.  Her father answered the door and saw this this tall man from the US Air Force standing there.  He didn't understand English so he had their neighbor translate.

This man asked if he could date Bella Rosa.  Her father replied, "Our family doesn't date, we marry first... then we date!"  Which this man then asked for Bella Rosa's hand in marriage and requested to take her to America with him. Her father granted his request. He told Bella Rosa that this would be an opportunity for her to come to a rich Country and have a better life.

Bella Rosa felt abandoned and unwanted by her parents.  She was 16 years old and all of her Dreams, were gone in an instant.

WOW!!! What fear this young girl must have been going through. Having to leave her family, brother, sister, boyfriend, and her Country.  She didn't understand or speak any English and would have to move to America, with a complete STRANGER!

There was a young Polish boy who grew up on a Ranch in a small Country town, with his older brother and sister.  They called him Porky, because he liked Porcupines.  He was a good looking boy. He had the 50's Pompadour style greased black hair, green puppy dog eyes, he dressed in rolled up jeans, combat boots, a white t-shirt, and a leather jacket.

Porky worked on the family ranch and would get up every morning before school, to milk his families 23 cows.  He was a Cowboy at heart, loved Country music and rode horses. His passion was restoring old antique cars.

Porky and his brother liked to blow things up and they were always getting into trouble for starting fires, in their small town.

After college, Porky left his small town and enlisted in the Army.  Being the risk taker that he was and wanting the thrill of danger, he became a Paratrooper in the Army's 82nd Airbourne Division.

YIKES!!! I can't imagine jumping out of an airplane or anything like that. Porky must have had no fear and loved the adrenalin rush.

During that time Bella Rosa had two children and was unhappy in her marriage, to this stranger.  She missed her family and her Country, but she didn't want to take her children away from their father.  Therefore, she was determined to make a life for herself and her children in America.

She moved to the city and applied at the top dance studio there.  She was hired on the spot and began teaching dance lessons.

Meanwhile Porky's tour of duty in the Army was over and he moved to the city, also.  He bought a brand new 62 T-Bird Convertible and was somewhat of a playboy, who dated a lot of women.  He was known as 'The Elvis' in that town. ;)

Porky worked close to the dance studio and would eat lunch at the restaurant across the street.

Bella Rosa would cross that same street everyday to grab coffee or a bite to eat, from the same restaurant.

That's when Porky first saw her.  Who was this beautiful woman, he thought? He watched her for a few months, through the glass windows in the studio and the restaurant.

He finally had to meet her, so he went to the dance studio and asked about taking lessons, from Bella Rosa.  They explained to him that her schedule was booked and he wouldn't be able to.  Porky pulled out $1000.00 from his pocket (which was a lot of money back then) and said he would only take lessons from her.  The studio then agreed and they asked Bella Rosa to work more hours.

Bella Rosa was a little shy when she first saw Porky, as he was very handsome. She tried to teach him to dance, but he was more interested in flirting with her. They started dating, which was against the dance studios policy and soon after Bella Rosa was fired.

Bella Rosa didn't care, she was happy and in love.

During that same summer in the middle of July, Porky told Bella Rosa that he made plans for them that evening. He rented out the most plush Hotel suite in the city.

When Bella Rosa arrived, the room was filled with long stem Red Roses. They had wine, dinner, talked and laughed. Porky then handed her a gift wrapped box.  When she opened up the box it was a pair of red pumps.  He told her to try the shoes on and then they would go downstairs to the bar and dance, the rest of the evening.

Bella Rosa slipped her foot into the shoe and felt something inside.  She then took the shoe off to find out what it was...

As she reached inside the shoe, she pulled out a Diamond Engagement Ring.

People always ask me if I really BELIEVE in...

Two Hearts DESTINED to be Together?

My answer IS always the same... ABSOLUTELY!

It was September 5th, 1964 when Porky and Bella Rosa were Married.

Thank you for showing us that although we may face Porcupines in life, if we hold onto the Beauty of the Rose...

And thank you for naming me after Elvis' daughter, too. hehe

While reading, I was already having hints to the love story but I waited patiently for the ending... and it doesn't have one Lisa. It's a love story celebrated every year...

I've always been curious of your name...and your Elvis' videos and now I finally knew why :)

Wish I could find a Porky...ahahaha... perhaps in another dimension ;)

What a wonderful story of love and strength. What a beautiful atmosphere to be raised in. You pay your parents grat tribute in writing and sharing this.

How lucky you are to have known a wonderful love story and one that is so close to you....

What a lovely romantic story. I always believe in love and can never give up on them. Your parents are soul mates and that is why they had to meet and share their lives together.

What a wonderful story , I loved that your mom went for it!! True love is there just waiting for us sometimes we take the long route to it but when we get there it was worth the trip!!! Thank you so much for sharing the story of your parents love!!! This really touched my emotions!!!

Beautiful and romantic story, loved it. Thank you for participating in my collage making event and for sharing your parents love story with us. They sure are soul mates, like my friend Rimly has said.Great post...

So beautiful and romantic.....enjoyed the way you have written it.

@Melissa A Porky will find you!!! You have a BEAUTIFUL heart and Fairy Tales do come true! ;)

@Jan Thank you so much for the SWEET comment. Yes, I am truly blessed with wonderful parents.

@Savira Gupta Thank you for the comment. Yes, I am lucky to have such amazing parents.

@Rimly Yes, my parents are soul mates and it is such an amazing LOVE story! I still believe in Fairy Tales.

@Jim Thank you so much for your kind words. I totally agree with you... True LOVE is worth EVERYTHING!

@Sulekkah Thank you so much for the comment and you are welcome! ;)

@Jamu Thank you for reading and commenting. I am glad that you enjoyed it!

Oh, what a wonderfully romantic story and, to top it all off, it's true! Wow! Happy Anniversary to your beautiful, handsome parents!
Blessings!

It's great revisiting this again Lisa :)I really need to read something like this every now and then to keep the faith on fairy tales alive :P...Happy Anniversary to your parents :)

Always wonderful to revisit this story of your parents' love. May they have the most lovely anniversary yet...
Porkys are a million a dozen... few and far between... but I believe we all have someone out there. Life doesn't have to be a fairy tale to have such a great Once Upon a Time moment... but true love will find us wherever we go if we open ourselves up to it...

@Martha J. M. Orlando: Yes, it is TRUE and BEAUTIFUL! Thank you so much, I truly appreciate it and so do they!

@Harmony Courtney: AMEN and AMEN!!! So very TRUE. Thank you so much. They are reading all the comments and appreciate them, very much. ;)

'the words ingested as you say
take them as concrete or sand, you may.'