Ripple in the Water

As I gazed outside his window,
it appeared desolate and bleak to me.
He softly whispered,
"I saw an Angel come down and stir the sea."

My eyes filled with tears,
as I turned around and looked into his.

I saw the reflection in his eyes...
As the moon
danced upon the water,
resembling
Angelic Wings.


There are times in our life, that we need to look into another's eyes, to see our situation from a different perspective.  As these beautiful words were spoken to me, they gave me hope, in all that I couldn't see.

For weeks I had pondered his words.  They carried me through a tough situation, that I was going through.  I also prayed during that time and that's when I envisioned the 'Pools of Bathesda.'

The 'Pools of Bethesda' was a place, where people would gather and wait for an Angel to come down and stir the water, in order for them to receive a miracle.  There were five porches leading into the water.  Interesting, because the number five represents GRACE and I think we could all use a little more grace.

During that season when the Angel would come down and stir the water, the people would rush towards the water and try to be the first one into the pool.  Whomever stepped into the water first, would be healed of whatever sickness, disease, infirmity, or sorrow, they may be going through.

WOW!  Could you imagine that?  Imagine walking around and seeing all these people, blind, crippled, sick, heartbroken, etc., just sitting there, waiting for a miracle.  They were just staring at the water and waiting for it to be stirred, as their lives were passing them by.

Jesus walked through, these very same people and He was moved with COMPASSION.

As Jesus was walking through the crowd, He saw a man that had been there for many, many years.  He asked the man, "Do you want to be made well?" The man answered, "Sir, I have no man to put me in the pool when the water is stirred up, but while I am coming, another steps down before me." Jesus said, "Rise, take up your bed and walk" and immediately the man was made well and he took up his bed and walked.

The amazing thing to me is, that Jesus simply asked him if he wanted to be made well?  He had been waiting by the pool for years, why wouldn't he want to be made well???

Interesting... Jesus just asked him this simple yes or no question.  Instead of answering "yes," this man began telling Him, all of the reasons why he couldn't be healed and that no one would help him.  Jesus then told him, to get up and walk.  His WORDS healed him.

I think there are a lot of people today, that can relate to this man.  They are sitting around in a desolate place and their circumstances that surround them, seem to look impossible to overcome.  They are focusing on all of the reasons, why they can't be healed, or why they can't get out of this place.

Maybe they have settled in their situation and have become accustomed to living that way... or perhaps they are just stuck and they need someone to help them?  Whether it be an addiction, a sickness, financial difficulties, a broken heart, or depression, there are many people sitting around, waiting for the water to be stirred.

The stirring of the water, is like a ripple effect... it expands.  Much like encouragement spreads.  Maybe, all of us need to widen our lens and cause this STAGNANT water to be stirred, inside the hearts of others.

What if, we were all moved by COMPASSION and we took some time to encourage each other, by simply saying... "Don't give up, I'm here for you, It's never too late, Don't sit here any longer, You can do it, You will make it through this, Get up... Walk."

Sometimes, all you need is just one WORD of encouragement, or one person to BELIEVE in you, to make all the difference in the world.

What do you SEE?

Thank you Nikki Sixx for stirring the HEARTS of others and spreading...
Encouragement, Hope and Love.  ~Ti Amo 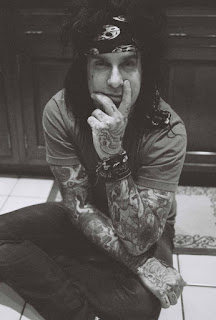 "We have a way to actually communicate with people
and we've gotta be careful what we're saying, it can't just be bullshit.
We have to actually say something that matters."  ~Nikki Sixx

"Take some time, learn to breathe
And remember what it means
To feel alive, to believe
Something more than what you see"

Sixx is a cool cat.

I agree I do follow Nikki on Twitter. He is very encouraging and inspiring. There new song would go great with what you wrote. Thanks for sharing this.

HAHA!!! Yes he is! I agree about the song too, but I wrote this before LOTBP came out. ;)

Wow very cool post, and support can really make a difference at times. I wish I had that support sometimes, but im also glad im able to pick myself up and walk on my own accord once i choose to. great post nonetheless =D

true words Lisa, It's hard though when in such a mood or circumstance to be motivated...I can relate to 3 situations I am currently in and do need a good kick...

@tmac2271 Thank you for reading and responding.

Our support comes from within us, first and foremost but we also need others around us that BELIEVE in us.

If we surround ourselves with people that are a positive influence in our life or listen to others online that are positive... it rubs off on us.

I will pray that God will surround you with people that will SUPPORT, LOVE and HONOR you!

Have a BEAUTIFUL day!

Thank you for your response and I agree. There are times when it is nearly impossible to be positive, especially when everything is crumbling around us.

I will pray for you and the THREE situations that are weighing on you! God is BIGGER than the situations, you are going through and will see you through. ;)

Thank you for being YOU!

Have a Beautiful day!

Your reflection is so powerful! So many are waiting for others to "stir their water" or have excuses why they can't do something, when, with love and encouragement, they just might make the move.
Beautiful said, Lisa Marie!
Blessings!

You've pointed out good points in this Gospel passage and I felt myself involved...

What I find so attractive in Jesus is He 'notices' 'insignificant' people in the society. That's the very first mark of love. He strikes a conversation and engages people to try out something new for a change, the way He did with the crippled man.

We do, often, find ourselves comfortable in our place of desolation and wait for a 'Savior' to put us out of the situation.

I think Jesus' invitation is for us to find ways to be more creative. Yes, to stir hearts. I truly love that phrase, otherwise, we will be forever focused on our pains and hurts, difficulties, struggles and inabilities.

You stir my heart. Yes, people do care. I believe the best songs ever written are those that inspire people to do better :)

I believe so much in the power of words. Sometimes one's words are the only help s/he can offer another person. So I offer words of encouragement to those who need them as much as I can.

WONDERFUL Post!!!
I loved it and sharing it. Thank you very much.
In my darkest days, all i need is a a kind word, a nice thought anything like someone just saying: I see you!

Another inspiring post from you Lisa. Just loved. Encouragement and compassion does have a ripple effect.

@Martha J. M. Orlando YES, very true! "Death and Life are in the power of the tongue." Thank you so much for reading and commenting! Blessings to you, as well.

@Irene @ Inspiration From The Little Things YES, I agree! Thank you so much for reading and commenting! God Bless you too! ;)

@Nikky44 Thank you so much reading and for sharing my blog! Yes, ONE word can change everything! ;)

@Rimly Bezbarua AMEN! YES it does!!! Thank you for your SWEET compliment!

Having re-read this, I find the parallels with what the Holy Spirit has been speaking to me about in line once more with your writing, and your re-posting of this.

Nikki truly is a stirrer of hearts, and in this way, a messenger, the original meaning behind the word ANGEL. His lyrics, photos, and his story, are inspiring to those that allow his heart to touch their own.

@Harmony Courtney: AMEN! YES, he is... a stirrer of hearts!!! Thank you so much for re-reading and commenting. ;)